I was aware of all these events, although I was preoccupied with a much more weighty development in my life: the birth of our 11-pound son, Forrest Bradley Bacon. I had never been more thrilled and terrified and touched by an event, and I wouldn’t be again until Forrest’s little sis, Marlowe, arrived 2 1/2 years later. The feeling I recall most, however, was impatience. We arrived early that Thursday morning to have the boy induced because he was in no hurry to meet us. (And he calls me a dawdler!) After giving the little guy almost two extra weeks in the womb, we had had enough. But morning turned to noon to afternoon to evening, and still there was no sign of Forrest.

Finally, the doctor asked, “Would you like us to go get him?” After 10 hours of waiting, we said sure. We had no idea, however, that Dr. Wright meant now. Ten hours of waiting, then boom!: rushed into the delivery room at warp speed, then presented with our son 10 minutes later to gasps from all the medical staff. “What’s wrong?” a terrified Shanna asked. “Why is everyone reacting that way?” No one had ever seen a bruiser as big as our 11.3-pound beauty. For days afterward, Forrest was the star of the show in the warming area with the other newborns. People would stop and gawk at this Gulliver surrounded by all the other Lilliputians.

The Chicago Cubs were supposed to end their seemingly eternal World Series drought in 2004 after falling five outs short of reaching baseball’s Fall Classic the year before, or so we Cubs fans thought. If they had, Forrest might’ve been named Dusty in honor of the Cubs manager. That’s assuming, of course, I could’ve sold that name to his mother, who previously had shot down Marlon, Elvis, Cash, Strummer and several other of my creative, clever tributes to my pop culture heroes. But after months of wrangling, we settled on the safe route, naming him after his grandfather, Shanna’s dad. (After all, two years later the Cubs fired Dusty Baker, and we’ve never once considered the same fate for big Forrest.) I always figured that we would honor my father, Richard, by giving Forrest that middle name, but I’m sure my dad was even more touched when we gave our little man my younger brother’s name. Bradley, the most generous person I’ve known, died two years before at the age of 33.

I took a month of family leave from the newspaper after the baby’s birth, and it was incredibly tiring, stressful — and wonderful. I can still feel Forrest’s little heart beating next to mine as I carried him through the supermarket in his Baby Bjorn on one of our first trips outside the house. I will never forget how wonderful it felt just walking through the frozen food section, covering his little sausage legs as I protected him from the cold. Such a simple yet life-transforming pleasure. Indianapolis residents will never forget that night for another reason: On Nov. 18, 2004, years of building an NBA contender ended in a flash when the Pacers’ players fought with Detroit Pistons fans at the Palace of Auburn Hills. That’s all Indianapolis seemed to talk about for weeks, though I saw the replay and quickly got back to more important things.

When our son was born, I never knew that my heart could be filled with so much love. It wasn’t a fleeting feeling, either. Eleven years later, there is nothing more enjoyable than reading or playing with the kids, or watching them in sports or talent shows or showing off their work at school. There is no place I’d rather be than wherever Forrest and Marlowe are. 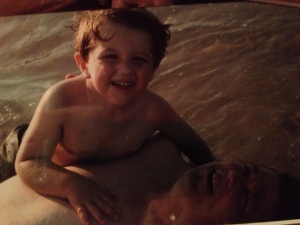 But I cannot be with them this year. I’m on the Appalachian Trail, trying to put my life back together after Shanna’s and my divorce. In 11 years, I had never missed one of my children’s birthdays. Until Wednesday, that is. I talked with both kids on the phone from a cheap motel in Great Barrington, Mass., but it’s just not the same. And I’ve never missed my favorite holiday, Halloween, despite working nights every year but last fall. Until Saturday. It kills me to be away from my kids, whom I love more each and every day, despite that not feeling possible back on Oct. 28, 2004, when this grinch’s heart grew three sizes that day. So I walk and I write, dreaming of the day I will be back with them. And I know that I’m out here on the trail as much for Forrest and Marlowe as I am for myself. Kids need a father, but they need one who is whole. Each day out here, meeting incredible strangers and fellow hikers helps me refill that heart just a bit more.

Forrest and Marlowe, I tell you this every day in the postcards I send home, but I can never say it enough: A father could not love his children more than I do, could not be more proud of them. You are incredible, and I can’t wait to be with you again.