“Come all without, come all within
You’ll not see nothing like the mighty Quinn.”

The Appalachian Trail is a physical grind, no doubt, 2,189 miles through the woods and mountains of the eastern United States. The bigger challenge, however, is the mental, finding the inner toughness to keep hiking day after day through the cold and dark and, more importantly, the rain. With 634 miles to go, I am shot, physically spent and mentally beaten up. If not for a Christmas miracle, I might be back home in Indiana, glued to a sofa.

The week of the holiday, Virginia was experiencing a historic heat wave. It hit 70 degrees on Dec. 26, and, as many people were quick to remind me, I was lucking out on weather as I pushed forward with my thru hike of the AT. I enjoy warm weather as much as the next guy, but if I had my druthers I’d take 20 degrees over rain every day. And when the choice is rain every day, as it was for six days leading up to Christmas, I’d prefer 20 degrees and a root canal. I cannot express how demoralizing it is to be sopping wet day after day after day. So I made a choice: I would take off Christmas Eve and Christmas Day, holed up in a warm, dry motel room.

To win the mental showdown with this trail, you need to have things to which you can look forward, be it visits with friends, comforts of home (such as ice cream or burgers) or days off. So I had that carrot dangling in front of me. When it rains every day, though, and you’ve enjoyed your final planned visit with friends on a six-month hike, five days can feel like five weeks (and 120 miles feels like a lifetime).

Dec. 20, as I left my friends Brad, Todd and Sushant, our 24 hours of laughs sustained me on a 13.5-mile hike. Dec. 21, it rained, making a 26.5-mile day a 14-hour mental and physical grind. (My only respite came early afternoon as a beautiful big black bear shot past me through the woods. Glorious!) Dec. 22, I dodged the rain only because I got a very late start, my morning procrastination getting the better of Mother Nature, who turned off the faucet at about noon. I would be dry, but I would be out late, picking my way through jagged rocks and rock-hopping streams till about midnight on a 22-mile day. I don’t really mind hiking in the dark, but it requires incredible concentration as you stare down at the ground on every step to make sure you do not trip. A few night hikes in succession can be exhausting, as your eyes and brain are working overtime. I don’t mind arriving at shelters late, either, now that the trail is deserted and there are no other people to inconvenience.

As I stumbled into the Harpers Creek Shelter, however, I noticed I was not alone. Ordinarily, I might’ve quietly set up my tent behind the shelter to avoid bothering these people, but the forecast called for all-night rain. “Sorry to show up so late,” I quietly croaked. (I had not seen another soul all day and had spoken perhaps 10 words over the past 48 hours.) “I can set up my tent if it’s a problem.”

“Oh, no,” a friendly voice said, “we’ve got rain coming.” This family of four, awakened by a smelly stranger from the woods, quietly and without complaint rearranged all of their gear to make room for this nocturnal newcomer. 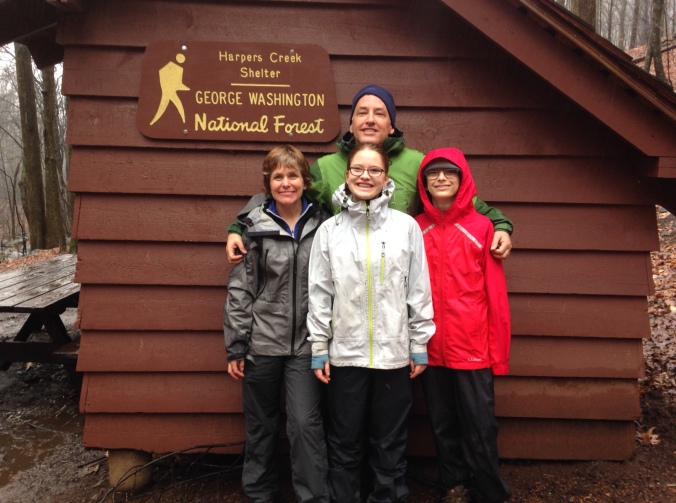 They were the Quinns: father Ted, mother Amy, 10th-grader Katie and seventh-grader Will, taking advantage of the start of school break (and a rare break in the holiday weather) to spend two nights in the great outdoors just two hours from home back in Richmond. As I quietly hung my food bag and changed into my camp clothes, Amy asked if I was hiking the AT. Yep, I said, the whole way. I apologized again for waking everyone and thanked them for making space for me. We chatted for a few minutes, then I apologized again. “I’m sorry to keep you awake any longer, but I need to write postcards to my children. You see, I send each of them one every single day I’m gone.” Katie and Will, it turned out, spend a big chunk of their summers away at Scout camp with their father, and Amy sends them each a postcard every day. “Yes!” I thought, “now I know what to tell Forrest or Marlowe in tonight’s postcard!” (When your brain is dead tired, sometimes  it’s tough to come up with fresh stories or ideas to share with the kids.)

The next morning, I got another late start on my hike. It wasn’t because I had to scale The Priest, a 3,000-foot climb over the next 3.5 miles, something I had been dreading all week. And it wasn’t because I knew it would rain during my entire 25-mile hike. No, I got a late start because I sat around talking with the Quinn family for two hours. The longer I talked, the more my depleted spirit seemed to refill. A couple of times, I apologized for talking so much — “I haven’t seen anyone in days” — but they didn’t seem to mind. They offered me breakfast; even though it was my regular breakfast on the trail (instant oatmeal and instant Starbucks), it seemed to taste so good. Since they were headed home that day, they gave me all their extra food. (After burning out on salami and cheese back in August in New Hampshire, I was stunned to find out how good it could taste again.) Ted gave me his extra AAA batteries, essential to keep my headlamp lit as I try to rush home to my children.

Katie mentioned the postcards her mom sends her during the summer. “Sometimes,” she said, “you won’t get any cards for several days, then you will get about six or seven in a day. It’s great!” I told the Quinns that many times I cannot send my postcards for a week at a time. “When I finally left the 100-Mile Wilderness in Maine,” I told them, “I mailed 26 postcards in one batch.” Katie asked if I’d like them to mail my postcards to Forrest and Marlowe, so I handed her eight or 10 to send from Richmond.

As I prepared to head out to tackle The Priest, no longer afraid or demoralized, I overheard Ted tell Will, “Don’t leave anything behind. And when we are done, we are going to sweep out this shelter. We will leave it better than we found it.” Yes! I thought, what a wonderful family. I’ve seen so much litter in 1,500 miles on the trail and in shelters, I was warmed by the wonderful example Ted and Amy were making for their children.

“Before I leave,” I said, “would you mind if I took a picture of your family?” I would not forget these people even without a photo, but I wanted one just the same. Before I snapped the pic, Amy saw my cream and crimson rubber band necklace that Marlowe made for me before I returned to the trail Oct. 1. “Did your daughter make that for you?” she asked. Yes, I said proudly, in my Indiana University colors!

After meeting the Quinns, I was recharged. Two 25-mile days into Buena Vista (and my shuttle to Buchanan) were a breeze. Dread had turned into spread, as in how a smile took over my face. If that had been my last encounter with the Quinn family, it would have left a lasting impression on my hike, my life. But it was not. On Christmas Eve, clean and warm and happily full of junk food in my motel room, I called to give my love to the kids. Before my ex-wife, Shanna, put them on the phone, though, she said, “They got a card from some friends of yours, people you met on the trail.” I had no idea what she was talking about. “Here, let me read it to you.” She read the card that arrived that morning, sent overnight from Virginia in a package filled with my postcards. It was from the Quinns. It told Forrest and Marlowe how they had met me in the woods, how I’d arrived after midnight because I was hiking so long and hard to get home to them. It told of how I thought of them all the time and how I was so proud of them. It even mentioned how I wore Marlowe’s homemade IU necklace every day on the trail and what it meant to me. It brought me to tears so far from home.

When I had described to the Quinns how special the Appalachian Trail has been, Ted said he had been trying to talk Will into joining him for an eight- or 10-day section in a few months during spring break. Will was noncommittal. I know you don’t know me that well, Will, and my lack of regular showers might hurt my credibility (in the real world, I do shower regularly 🙂 ), but if you asked me, here’s what I would say:

Jump at this chance to spend a week with your father far from the distractions of TV, video games, computers, phones and life. My father has been gone three years. I miss him dearly. We spent many great times together; we appreciated each other and savored most every moment. I would give the world to spend another eight to 10 minutes with my dad. Eight to 10 days, that would be pure heaven. And like my father, yours is one heckuva good man.

Come all without, come all within, I’ve not seen nothing like the mighty Quinns.

10 thoughts on “The mighty Quinns”