On Aug. 6, I hiked late into the night during a rainstorm in Maine. As my glasses fogged over, I stumbled past the camping site I had been seeking atop Sugarloaf Mountain. I decided to hike until I found a nice stealth camping site close to the famous ski resort so I could check out the view in the morning. I hiked another hour or two until I found a suitable spot to set up my tent among the rocks and roots of the Pine Tree State. (Given a vote, I would’ve named this gorgeous state “The Root Canal.”)

The next morning as I was taking down my tent, a section hiker named Otter stopped to talk. He was much friendlier than a typical thru hiker and wasn’t in a hurry, and I soon realized why. This fourth-grade teacher was out on the AT for only 200 miles and would finish the trail by 2019. His hike was a 10-year plan. “I started as a thru hiker,” he told me, “then I realized I was skipping all the views. When you are hiking 2,000 miles, you focus on finishing, not the journey.”

Otter’s words have stuck with me ever since. That night as I hiked past Sugarloaf, I decided it would have to be one of the views I would miss on the Appalachian Trail. The number of views I have skipped has reached the hundreds in the four months since.

It has taken me 1,200 miles, but I now think that a thru hike is not the best way to experience the Appalachian Trail. If you want a physical and psychological challenge, sure, a thru hike is for you. If you can’t spare two weeks’ vacation every year, then a 10-year hike probably won’t work, either. But if you are like me and enjoy stumbling on America’s overlooked jewels, you should break up this hike. I have missed too many places I would have loved to see in my urgency to finish by early February. (Sorry, Marlowe, Dad’s dream of a January finish is melting away, even in this unseasonably warm Appalachian winter. Yes, it really did hit 70 degrees Saturday — Dec. 12 — in Virginia.)

I have missed Civil War touchstones Gettysburg and Antietam because I could not spare the half days required to visit these sites so close to the trail. I hiked right past Annapolis Rock, oblivious to this stop on one of my many night hikes on a 20-plus-mile December day with only nine hours of daylight. I have blown past several “views” recommended in my AT guide daily as I try to grind out the miles. It’s something a guy who loves meandering car vacations for their lack of urgency and the discovery of classic American kitsch never could have imagined.

Sometimes, even when we’re in a hurry, we still get lucky. I heard about Front Royal, Va., from day hiker Mark and hostel caretaker Glenn on Saturday. I heard about the good food and the cool new hostel. I decided to spend a night and fill up on greasy cheeseburgers. Then my knees decided I had better spend another day and rest up for the climbs in Shenandoah National Park. Thank you, you knobby old knees. 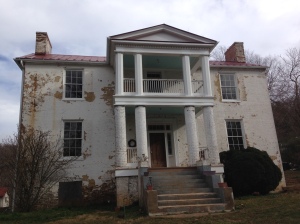 The Mountain Home Hostel and Cabbin was a revelation. For $20, you get a shower,  clean bed, shuttle to town, and breakfast in the former slave quarters next to a soon-to-be bed and breakfast in an 1847 house. Lisa and Scott, who hiked the AT in 2012 with his son, have created a homey respite from the woods that is so much more cozy than a generic $100 chain hotel room along the trail. Two nights here is the best $40 I’ve spent in a long time. And that town 3 miles away? Front Royal has everything a hungry hiker could want: several restaurants, lots of ice cream, a movie theater and a compelling history.

This history major is embarrassed to admit that he had never heard of Belle Boyd, the notorious Confederate spy during the “war of Northern aggression.” Jim (above), my charming tour guide at the Warren Heritage Society, shared Boyd’s straight-from-a-soap-opera tale of the Martinsburg, Va. (now W.Va.), teen who shot and killed a Union soldier during an incident involving her mother. After she was exonerated in the killing — she was found to be defending her mom’s honor — young Belle was sent to Fort Royal to keep her out of trouble. Under the care of her uncle, who ran a hotel in town, the 17-year-old Belle began to spy for the Confederacy. When the Union shifted many of its troops from town, “the Siren of the Shenandoah” rode past the American troops to pass along word to Thomas “Stonewall” Jackson. He used that information to win the battle of Fort Royal on May 23, 1862.

Despite six arrests for spying, she escaped to England, where she became an actress who starred in autobiographical plays about her role in the war. She married three times — all “Yankees” — wrote a book about her activities during the Civil War and died in what is now the Wisconsin Dells during a trip to perform on stage. In the painting below, Belle stands between images of her two favorite Confederates: Stonewall Jackson (table) and CSA President Jefferson Davis (wall). On the floor of the artwork is her discarded letter to Abraham Lincoln demanding the American president free her husband, Union Lt. Sam Hardinge, who had allowed her to escape to England after his troops had captured her.

Rushing through a thru hike can force you to fly past such places. In Maryland, I gave myself just five minutes to pause at the battle site of Fox’s Gap. Five minutes to process a pivotal encounter that left Union and Confederate generals dead. What if this battle had taken place two-tenths of a mile off the Appalachian Trail? Would I have taken the time? Lucky for me, I didn’t have to find out. 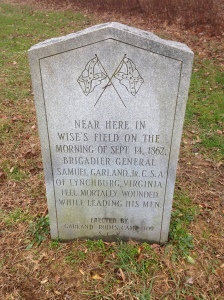 Some places cannot be rushed. Would I like to be done hiking tomorrow? Sure, but this man intrigued by abolitionist John Brown has waited decades to visit Harpers Ferry, W.Va. Nothing could have forced me to hike through here at night. Walking where Brown and his raiders helped spark the Civil War gave me chills. The feeling I experienced stepping inside Brown’s fort (below), where he was captured by American Col. Robert E. Lee in 1858, will stay with me always. How many other unforgettable moments did I miss while rushing to complete my AT thru hike?

4 thoughts on “There must be a better way”